You should know that Finland has been awarded as the happiest country of the world .

If you have been  once in Finlnad you may also know the song “Olen Suomalainen”?
(Well, if you don´t know the song listen it below!)

It’s a kind of Finnish unofficial anthem, but somehow regarded more proudly than the official one.

If you translate the song, then you see how Finnish people is strong, determined, and resilient.

Well, I don’t doubt they are, but…

…what’s happening with all that strength when it’s about cycling?

Why nobody in Helsinki is able to pedal if is not summer time?

It seems that both institutions and citizens forget about the magic two-wheeled machine most of the year, when is not too warm.

Finland, the country that had been described as the happiest land, with the strongest folk, becames a desert of snow and lazy people in the winter, where cyclists have no rights, the bike lanes are left totally abbandoned. This is true at least for Helsinki.

Is it impossibile to cycle in the winter in Finland?

No. It’s actually easier than using a car, walking or even taking a bus. 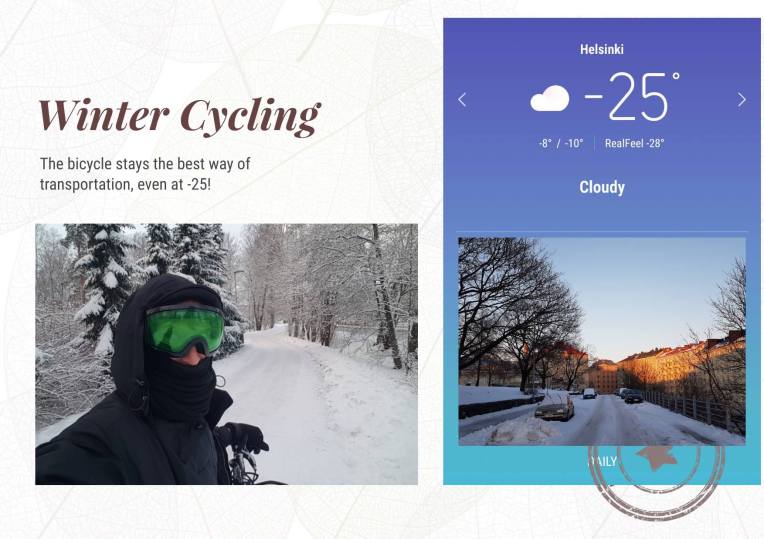 BIKE VS WALKING
If you have the right tires on your bike—and there is an actual acceptable bike lane—it may be less slipery than walking. You would warm up yourself cycling. And, if you don´t want to risk to sweat, you could get an electric bicycle. 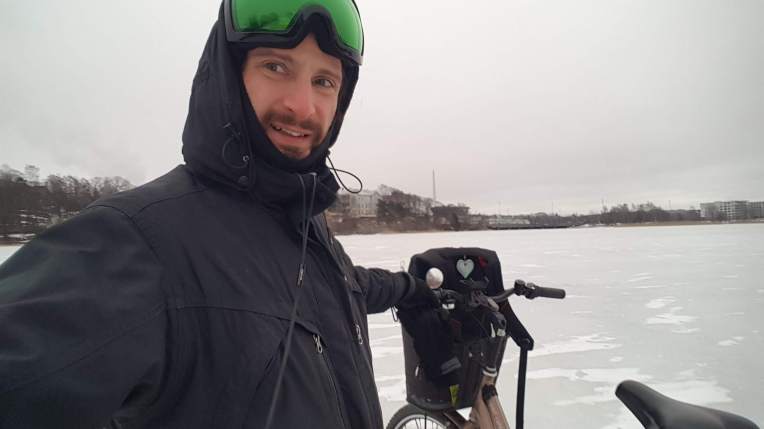 BIKE VS PUBLIC TRANSPORTATION
With the bicycle you don´t have to freeze at the bus stop waiting for the bus, when you don´t move, you feel the cold even more and the time passes more slowly.
If you have the right bicycle, you may be even faster than a bus and could get straight from point A to B.

These above are just my simple considerations. These are some comparations that come straight to my mind, without even doing too much research about the topic.
However, if you do want to do a research about how easy is to cycle in the winter (with the right gear and the right biycle), just do it!  I am sure that you will find more reasons why to use a bicycle in the winter.

I really can´t hope anything else than a wake up in Helsinki´s institution and residents. Let´s have a look at the cool–not too far–neighour Denmark: Copenhagen.

Tattoos, sauna, coffee,  smoking, alcohol, many trees around you and stone under your feet instead of soil.
Stereotypes or real characteristics of Finland?

It’s hard to draw a line between facts and personal mental representations, but one of the facts is that the Finnish nose is really peculiar, you can recognize it directly, the central part,  between the holes, is a bit large at the bottom part. Really funny and sweet.

One of the things I learned, not in Finland, but in the Navy is how to sit on a wc,  now that I travel is quite useful.
To stay in topic of wc, I can say that toilets in Finland are amazing. The shower bidet is just divine, I suggest you to get to know it.

Finnish girls have a really particular way of walking, completely straight on their spine, they don’t move the head at all and they just point forward with their eyes, it looks almost like a march.

Having contacts with finnish women I discover that loving and caring too much for a woman in Finland is equal to lose her, good to know.

Because in Finland women behave like man, I start to behave like a woman, now I see what means to reject someone interested in you and you to love accompanied by interest…

I did learn something from women in Finland, for example how to recognize mushrooms and how to down from stairs without light, I tried it several times and is curious and interesting. But I travel to find a reason why to stop traveling,  for the same reason I did one night stands.

To give a bottom line in a more martial ‘artistic’ way: “As a samurai prepares himself life long for death, I prepare myself for you to leave me”

Ah, you would think, why do you just write about girls?
Don’t worry, ‘par condicio”, I write about Finnish man as well, just continue reading…

Like fighters in the aikido do (to stay in theme of martial art), I use external power and energies to get my own benefit with no use of my internal power. Like in yin-yang,  I don’t lose my yang by using other’s yin.
This is for sure useful while sleeping in the forest….

The forest is one of the most comfortable place to sleep, there is nothing as magnificent as opening your eyes and seeing the green leaves on the trees, hearing birds and other animals peacefully living their life.

A domestic cat between the trees of the forest, he looked like a fish trying to walk, not even able to make few meters without hurting himself, how sad.

Sometimes life is really paradoxical, in Finland, one of the richest country, I learn one of the thing done mostly by (non-economically)rich people: “dumpster diving”.
But actually the day there will be no food in the trash, or even better, no trash at all, there will be no poor neither.

During the Finnish winter I set down a new polar record, cycling at -18 for three hours in total, in one day!
While cycling daily at -25 for about one hour.

As reward for my nordics efforts I also met Joulupukki, the real Santa, which lives in Lapland and nowhere else. I have to say that he was quite shy. To be shy is just a way of damaging yourself and get others dominate you.

This is something I think, which applies not just to Joulupukki’s, but to Finnish men as well, which I find quite shy. While the women are not shy at all.
We often have more fears by thinking than by acting,  when you think too much about actions you alienate yourself from the reality becoming frustrated and fearful.

What makes me less shy is also riding a bicycle, it makes me understand how to live and how to love:
If I ride knowing and thinking that my destination is close to me and I should arrive in short Time, I will be anxious, hurrying up and ruining the trip.
If I just ride without the thought of My destination, I enjoy My time.
The same for loving and living.

How to find an address in a rainy day in Finland with a smart phone and a condom,

Home addresses in Finland are not like in other countries, one house number may be the same for one, two, three, even more than ten buildings!
Then there are letters to identify buildings: a, b, c, d…¢, §, Z!
Then eventually there are more numbers coming after the letter … 1….2…3…5…8…1018586.
House numbers, letters, numbers…. And locals mostly don’t know where an address is if you ask.
I am in a shop, outside is raining and I really need to use my phone to find the address of my host.
I don’t have a map, I need my smart phone but is raining heavily and I have no way to protect my phone, I put a condom on my phone, people is looking weird to me…
They don’t understand the utility of my act. But it works!

There are societies where public social services are good, other countries have just local people that help each other, the worst place to be is where none of the two things is to find.

Traveling I just realize that the only way to get to know a country or a culture is to go there, nobody can explain you the feeling and the experience of visiting a place, no matter how extensive they talk or write about it.

One thing that I hate are airports or airplanes, they make you move so fast that you don’t realize where you are, they all look the same.

The Capital cities are often the least representative towns of the culture and traditions of a country. But still I spend much time in capitals, cause I am lazy and in big towns I find much more services…

ah, I almost forgot to mention: if Finland may be not the country of rabbits, at least Helsinki is!

In Helsinki, I have also met a really skillful artist,  Aino Kurki:

I am already starting to promote the new Cyclonudista event, even if I will not be there that time.

I am sure that the Manifiesta will be great!

Naked we are equal, or almost.

On Ilta-sanomat (a finnish newspaper) they are quite criticizing the ride:

After they interviewed me I still have something to say,  maybe even more important than what I said in the interview (cause during an interview you don’t always have much time to think about what to say).

This event has two big messages (at least for me):

Mark of independency Makes the cycler feeling satisfacted of himself being able to move with “his legs”,

Challenging you to repair it yourself feeling even more proud of yourself,

Panoramic: it makes you admire the view you have around,

Sincere and transparent (cause you can’t hide yourself),

Making  you feel traveling (you see where you are, and discover slowly places),

Making you Breathing good air (when you are between the trees),

Setting you on a higher point of view than in a car,

Flexible to stop where you want,

Making you go wherever you want,

Allowing you to listen audio-books or music during the trip = learning,

While big motorized vehicle (such as cars) are:

Covering the beauty of architecture and landscape,

under the capitalist monopoly of politics and economy,

Expensive (to drive and to maintain)

Anti-social (cause you lock yourself in the car, you are kind of alienated),

Hard to park (there is often no space to park),

2) NAKED = EULOGY TO SIMPLICITY AND FREEDOM, AS OUR PLANET

Simplicity (you no need much to feel good),

Freedom to show yourself,

Freedom to not have anything with you,

Refusing all accessories that this society continuously propose us,

Showing how delicate you are,

Naked you are equal to anybody else,

You are not hiding behind masks,

In this article it looks like that the police come to stop us or to argue. Is not true, actually I notified in advance to the police that we were about to do this protest and they were there to block the traffic and give us the right of manifesting.

Kids have no problems with nudity, adults are the ones that teach them (wrongly) that nudity is a bad thing, kids grow up with this uncomfort for their body cause adults continuously told them that they have to cover them self all the time.

Is not in my intention to offend or irritate people by being naked, I am not asking (directly) that we should all go around naked, but I ask to be listened, I would like that people realize that simple naturalistic nudity (which appears as a bad thing) is not harming anyone, while pollution, over-consuming and waste is destroying us, we can’t eat from trees cause they are polluted, we can’t drink from rivers cause they are contaminated, we can’t breath in cities (and soon also outside cities) because air is full of  particulates.

We no need to be scientists to understand this, just take a deep breath in middle of the traffic jam and see how you feel.